How To Win Your Union Certification Vote — With Style

On March 3, 2022, The New York Times Tech Guild won its certification vote with a whopping 82% of votes in favor. Throughout the day, over seven thousand people watched the vote count live on our website, which we had updated the week before to include a live-updating vote count page. Winning our certification by such a large margin was a huge victory, and so was the excitement we generated about our new unit!

Why we built a live vote count page

A week or so before our certification vote, one of the members of our Organizing Committee had a brilliant idea: We should make a live vote tracker. The actual act of counting the physical paper ballots took place in the New York City headquarters of the National Labor Relations Board, and only NLRB staff and legal representatives were allowed to be there in person. There was a live Zoom feed of the entire process that anyone in the unit could join, but since the vote count was occurring during the workday, very few people would actually be able to follow the video call in real time.

One of the primary goals of our organizing campaign is to maximize engagement from unit members. We're building a strong union of coworkers that are willing to take a stand for each other in solidarity. And secondarily, we want to spark engagement from our community of tech workers and union workers outside the Times, too! The Zoom call just wasn't cutting it; we wanted everyone to be able to follow along and feel like they were a part of this victory. So we needed something more accessible, especially for people who would be checking in between meetings and needed to be able to quickly get up to speed.

Luckily, we already had a website, nytimesguild.org, that we built to be as easy to iterate on as possible. And we have a unit-full of product managers, project managers, designers, data analysts, and software engineers known for their outstanding live election coverage and data visualization. We couldn't have been better suited to the task of building a new live vote count page. So that's what we did!

How we built it

We had less than a week between the origination of the idea and the scheduled certification vote. Our timeline was strict, and everyone contributing time to this effort was doing so outside of normal work hours. We had to optimize for speed, which meant using prebuilt solutions wherever we could. We quickly came up with a list of requirements:

When it comes to realtime updates, it's hard to beat Google Cloud Platform's Firebase. The New York Times' own collaborative text editor, Oak, uses Firestore, one of Firebase's two database offerings, as the backing store for its rich text documents. Firebase has another huge benefit, too: it has a GUI for its database. It's almost astonishingly easy to edit any value in a Firestore or Realtime DB instance, and access to the database admin UI can be controlled via Google accounts. Since Firebase is a "Backend-as-a-Service" offering, it's accessible over HTTP and can be reached directly from the browser.

Since we were only worried about storing four numbers (the total number of ballots cast, the number of contested ballots, the number of "yes" ballots, and the number of "no" ballots), we opted for Firebase's simpler Realtime DB over the more powerful (but slightly more complex) Firestore offering. The difference in complexity between the two in practice is almost negligible, but Realtime DB fit our needs so that's what we went with. 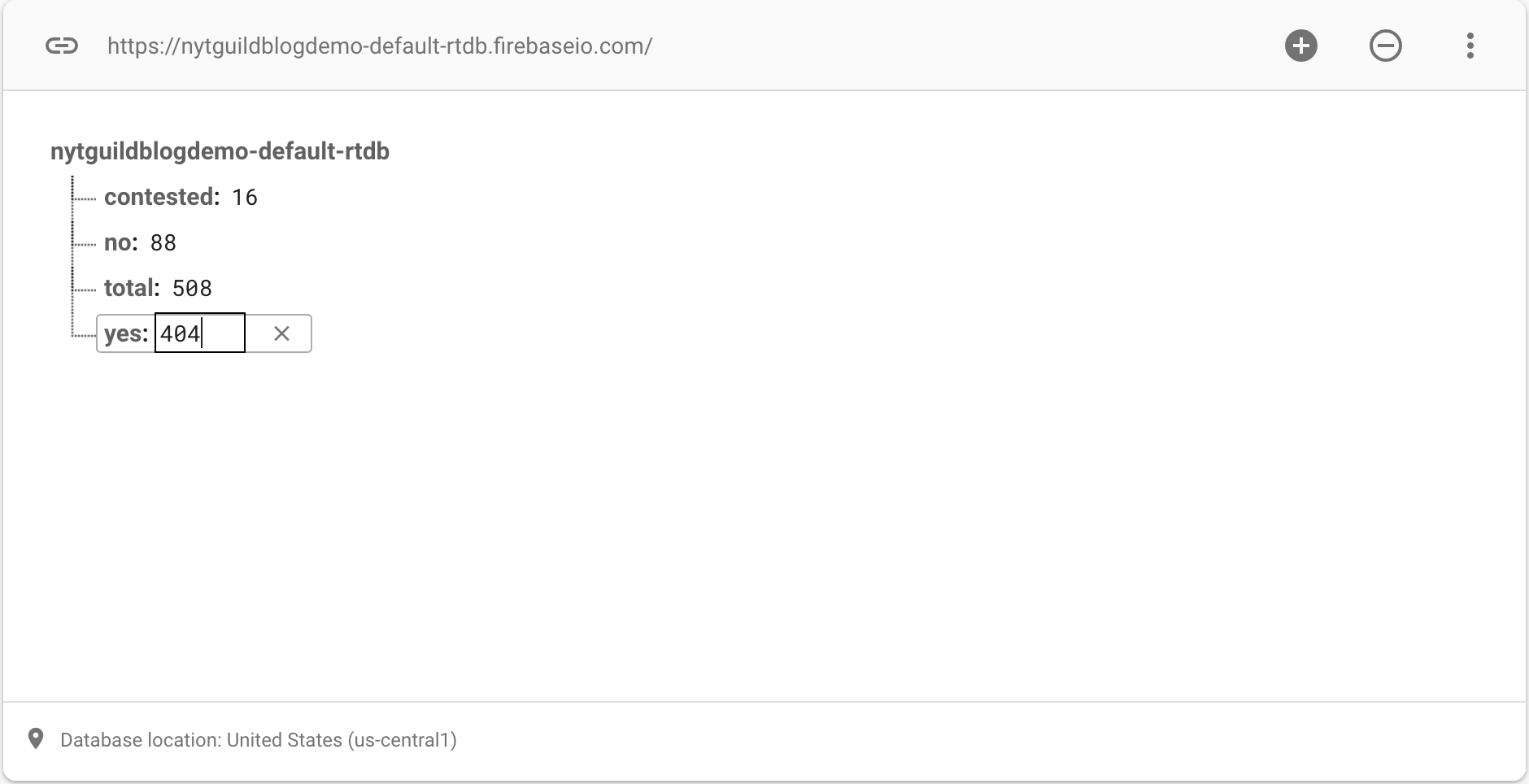 The code for subscribing to changes to these values was fairly simple. Our website is written in React, so we wrote a simple hook that utilizes the Firebase Realtime Database SDK to update some React state whenever the values change:

Note: Our entire website is open source! You can look through its source code at github.com/newsguildny/nytimesguild.org. The above code has since been removed, because the page doesn't need to update live anymore, but it was added in these two commits: 4e9e5cbfab, and e64242c15a.

We wrote the majority of this code in a pairing session with a few engineers and a designer; it only took about an hour! The rest was just a matter of appropriately sizing some DOM elements to make the vote count bar, and making everything look right.

The day of the vote

On the day of the certification vote, one of the Organizing Committee members was tasked with tracking the ballots as they were announced on the Zoom call. They had the Realtime DB UI pulled up and updated the values in the database in real time. When the "yes" ballots passed the threshold to certify the union, the page automatically updated to show a message celebrating our win. We dropped some confetti, too, for good measure. Even with a few hiccups (a "123" accidentally went in as "1234" for a brief moment, triggering the confetti prematurely for anyone who happened to be watching), the whole event was nearly seamless. And we got 20,000 page views in one day!

If you're interested in building your own vote count page for a unit certification, or if you have any other questions that you think the Times Tech Guild could help you out with, don't hesitate to reach out! You can reach us at nyttech@nyguild.org and NYTGuildTech. We'd love to help!

A huge thanks to everyone that helped make this happen:

How To Win Your Union Certification Vote — With Style

On March 3, 2022, The New York Times Tech Guild won its certification vote with a whopping 82% of votes in favor. Throughout the day, over seven thousand people watched the vote count live on our website, which we had updated the week before to include a live-updating vote count page. Winning our certification by such a large margin was a huge victory, and so was the excitement we generated about our new unit!

How Our Union Is Fighting Pay Inequity

One of the top issues our members want to address collectively as a union is pay inequity. We know vast disparities in pay exist at The Times, which we’ve heard about both through our organizing conversations and through an important salary sharing effort we began during our organizing drive. We’ve heard from tech workers in other workplaces who are interested in organizing that resources on our salary sharing project would be valuable. Here’s a guide to starting your own salary sharing process and an invitation to join us in the best way to fight for pay equity: unionizing your workplace.

In a detailed analysis of a snapshot of pay data from April 2018 for 913 full-time employees of The New York Times who are members of the NewsGuild, the Guild found salary gaps for women and people of color in some areas of the newsroom and the business side.